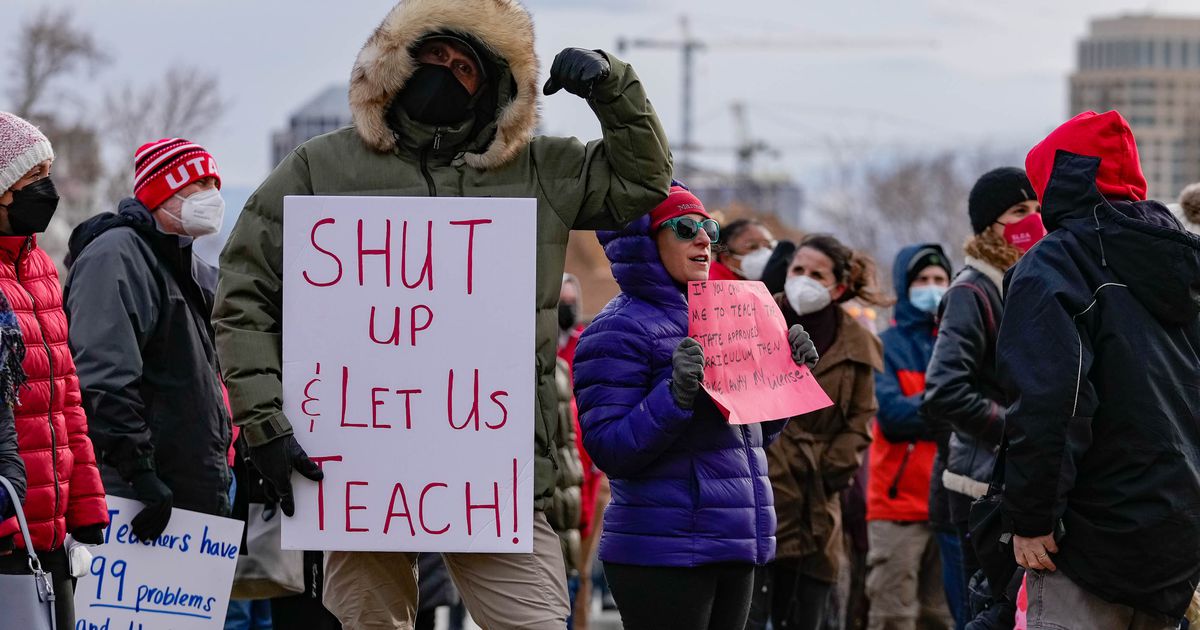 (Francisco Kjolseth | The Salt Lake Tribune) Highland High School teacher Brock Edwards joins other educators, parents and public school advocates as they rally on the steps of the Utah Capitol on Tuesday, 22 February 2022. Advocates feel many anti-public school actions have been taken by the legislature this year.

By the editorial board of the Salt Lake Tribune

Too many members of the Utah legislature fail to see that each new attack on the professionalism, independence and funding of state educators can only hurt the children who spend so much of their young lives in charge of these teachers.

Or maybe they see it, but they don’t care. Politicians and activists may simply have too much to gain from denigrating teachers and giving undeserved credence to wild rumors about nefarious happenings in classrooms, labs and libraries.

To hear some members of our political class say it, public schools are hotbeds of anti-Caucasian rebellion, communism and gay sex. Acting on the basis of these absurd beliefs is not only a waste of time and resources, it can only undermine public confidence in an institution that is at the heart of a civilized society.

It’s not that the answer to the many woes of public education is simply to spend more money on it. This is not the case. And it’s not that our schools don’t have, no less than any other human institution, problems, weak links, poor performance and a need for supervision. They do.

But there is a huge gap between reasonable legislative oversight and the current wave of right-wing activism that serves no purpose other than to get parents, taxpayers and employers to turn their backs on public education. and start putting their faith and our money into alternatives. Alternatives which, at best, will divert resources from the schools which will still have the task of educating the vast majority of our children and which, at worst, will seek to protect future generations from the understanding of the world that they will not only live in, but expected to run.

Heidi Matthews, president of the Utah Education Association, said 93% of its members plan to leave the profession after the current school year. It’s not just the poor pay, which has always been a given for Utah teachers, but the blatant disrespect from lawmakers, activists and far too many parents — most of whom have no idea. what happens in a school on a day-to-day basis. .

Even though Matthews’ figure is exaggerated, it still points to a problem that will cripple our public education system and handicap children in particular, as well as our culture and economy in general. A problem that will not be solved by harassing educators and cutting spending.

Utah is not alone in suffering from a decision by its politicians to win votes and raise funds by pretending to stand between innocent children and an education system that, in the feverish imaginations of these activists, exists to make white children feel inferior, to undermine their belief in the United States as perfect and unmatched, and to replace their parents’ morals and standards with an exotic belief system that involves many gender changes.

The 2022 session of the Utah legislature began with a reckless decision to cut more than $160 million in income tax revenue, the stream dedicated by the state Constitution to education. He then toyed with proposals to warn teachers that they can be hounded, fired, and even prosecuted for teaching truths about human behavior and American history that might make some overprotective parents uncomfortable. .

The good news is that these harassment bills appear to be stalled in committee. There’s also reason to hope that a new ruling allowing parents to take taxpayers’ money with them if they choose to enroll their children in private schools – Rep. Candice Pierucci’s HB331 – could also be lost in the legislative process. And that, even if it passes, faces a probable and well-deserved veto from Governor Spencer Cox.

There are still possible victories for public education. One is a move by Rep. Steve Waldrip and Sen. Ann Millner — HB193 — that would spend $47 million on an effort to provide full-day kindergarten in all public school districts in the state. The bill has already passed the House with a good margin and is also expected to be supported in the Senate.

Participation would be voluntary, but there is no doubt that a strengthened kindergarten can go a long way in preparing young children for the rest of their school careers. It is something that would make school more fluid for these children, their classmates, their teachers and the education system as a whole.

It is reasonable and appropriate to consider different ideas about how best to strengthen Utah’s public education system. They don’t all have to be very expensive, and they have to leave room for charter schools and other paths to innovation and alternatives.

But Utahs should be in touch with their legislators and their governor to let them know that every proposal regarding our schools should not be aimed at undermining our system, but at building one that is stronger and better able to serve. all children with a kaleidoscope of Needs.